Excerpt from the International Crisis Group

"To avoid an explosion in Zimbabwe that could cost thousands of lives and shatter Southern Africa, the opposition may need to launch a risky strategy of nationwide, non-violent protest. The country is more polarised today than ever, and in many ways, prospects for change seem to be slipping further away. Political reform is blocked, and nearly every economic indicator is heading downward. The political opposition and civil society organisations have yet to tap effectively into the dissatisfaction based on declining living standards, but they could become the spark that finally sets Zimbabwe toward change."

Funded by The McKnight Foundation, the “Kufusa Mari Two” rural microfinance project will work to strengthen and expand ASAP’s existing savings-led microfinance program for rural women in Nyanga District in eastern Zimbabwe. The project will improve the income and self reliance of over 6,000 women over the next two years.

The McKnight Foundation also funded ASAP Africa’s first VS&L project in the same area from 2001-2003. The first activity of the newly funded project has been to conduct a sustainability survey, to assess exactly how many savings clubs that were active in 2003 continue to operate today. Preliminary findings are that 78% of the groups are still functioning after over two years. Considering the current hardships that people have been enduring in Zimbabwe since 2003 – this is a phenomenal result! The final sustainability report will be posted on the ASAP Africa web site next month.
Posted by Anonymous at 4:44 PM No comments:


Today is an important day for Stephanie Marienau. After working as an intern for ASAP Africa this past summer, she returned to Vanderbilt on August 15th to embark on her senior year. Today – only three days later - she’s back in the Atlanta area to attend The Rotary Foundation Ambassadorial Scholarships Program interviews.
Yesterday I was privileged to be an invited guest at the Peachtree City Rotary Club and had the opportunity to meet District 6900 Governor and the local nominee for the Ambassadorial Scholarship. The quality of the candidates being considered is very high and the competition will be tough.
But with the help of Rotary International to channel the energy and enthusiasm of the youth of America today toward helping others – “A world without poverty” is truly an attainable goal.
Elizabeth Bara
ASAP Africa
Posted by Anonymous at 9:53 AM No comments:


On August 1, 2006 Zimbabwe dropped 3 zeros from the currency (see following article). For banks and accountants, this was a great relief in these hyperinflation and rapid devaluation conditions. Accounting software would reflect a balance of “overflow” when the account contained as little as the equivalent of USD 1,000.

But dropping three zeros from the currency has no true meaning for most of us - we cannot understand what effect this really has on daily life. Here are some recent examples of the problems ASAP’s staff in Zimbabwe have encountered.

Regai Tsunga and Rose Makhamadze both live in Dangamvura, a suburb of Mutare. Previously they paid zwd 200,000 for transport to work in Mutare each morning. Now they pay only zwd 200. “With the old currency in circulation, I pay the conductor new zwd 500 and receive old $300,000 in change.” explains Rose. This seems like a pretty good deal to most!

But on August 21st the old notes (bearer cheques) are no longer legal tender. The government is on a campaign to flush out the old currency. “The inconvenience to the travelling public is unbearable as police have mounted 24 hour roadblocks in search of bearer cheques.” All vehicles are stopped and searched. Passengers on buses must disembark and this is causing many people to arrive late at their various work places.

Tsunga went on to share another story. “One lady by the name Jane, with whom we are doing the ICDL computer training course and who works for Western Union (money transfer org) yesterday told me that she got confused with the zeros that she mistakenly overpaid a client by $16,000,000.00 in a single transaction. At close of business the shortfall was discovered and she had to go through all processed documents for the day. She identified the transaction and took all relevant details pertaining to it (name of client, contact details, amount of forex tendered, etc). She then personally went to the residence of the client who denied ever receiving any extra cash during the transaction. The poor lady wept profusely and said she would not leave the client’s residence. It took the client’s wife to persuade her husband to own up and surrender the money, which he eventually did. Her confusion, she confessed, emanated from the zeros.”

On the whole, people are slowly adjusting but there really is still some confusion especially given that the new currency is still very scarce and that banks are, through both the teller machines and counters, still dispensing the old bearer cheques upon cash withdrawals.

Political humour is universal…it is rumoured that Finance Minister Gideon Gono has actually changed to a Chinese nationality – now going as Giden Gn after removing 3 zeros from his name!
Posted by Anonymous at 12:28 PM 1 comment: 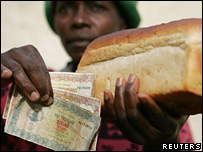 This week, the Zimbabwe Central Bank dropped three zeros from the country’s currency in an effort to fight inflation. Banks had been struggling to keep up with sums regularly in the trillions and often in the quadrillions. Individuals, too, had to cope with the highly devalued currency by carrying suitcases full of bills to make even small purchases.

The inflation has had a profound effect on Zimbabwe residents. Those who had lived comfortably are now struggling to meet even their most basic needs. Now is the time when ASAP Africa’s projects are more necessary than ever. By providing individuals and communities with skills, training, and knowledge, we are helping them to become self-sufficient no matter what is happening in the rest of the country.

As Causemore Samanga, a Kufusa Mari Senior Field Officer, reports, the Kufusa Mari project is even more important now because it teaches people how to pool their money and generate their own income with a self-funded micro-finance methodology. The project participants are inspirational in how they apply what they have learned and then innovate beyond their training to cope with the changing crisis in Zimbabwe.

For example, the Nyajezi cluster has responded to the growing economic crisis by going beyond their normal function and forming a cluster fund, which is headed by a cluster committee chairperson and a committee. The fund is made up of penalties from late comers and money left over at functions such as field days. The money is lent to clubs at 15% and the club lends it to its members at 20%, payable at the end of the month. The functions of the cluster fund are like the way the national reserve bank functions. In this way, the community is creating its own financial infrastructure, within the unstable Zimbabwe economy.

The clusters’ innovations are encouraging, but the national economy remains bleak. Please take a few minutes to read more about what is happening in Zimbabwe’s economy.

-Causemore Samanga and Stephanie Marienau
Posted by Anonymous at 9:07 AM No comments: